If you’re as fortunate as us to be living in Colorado, it’s a weekend pastime to visit local breweries (we have 92+ statewide). For those of you who don’t have that kind of brewery access, we documented the brewing and bottling of New Planet Beer at our contract brewer, Fort Collins Brewery. Check out the Tour photos>

During the process, New Planet Beer is mixed, brewed and stored in 60 barrel tanks. The brewers go through extra steps and procedures to ensure our gluten-free certification standard, and we can safely say they have the cleanest equipment around! The whole bottling process operates as an assembly line, making sure no step is missed. We observed the clean bottles pushed into single file formation on the conveyor belt, filled with  New Planet Beer, capped, labeled, put into the six pack carriers and then boxed to be shipped out to all of our accounts.

Fort Collins Brewery is in the process of building a brand new brewing facility. This new facility will be able to hold 100 barrel tanks, which means even more New Planet Beer in stores and restaurants near you. We’ll be sure to share a deeper look into the new brewery later this summer.

Thanks to the Fort Collins Brewery for helping us bring Gluten-Free New Planet Beer to our fans! 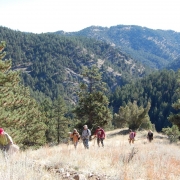 A Day on the Trails with Wildlands Restoration Volunteers

Rocky Mountain Brewfest 2010
Scroll to top
Are you 21 or older? This website requires you to be 21 years of age or older. Please verify your age to view the content, or click "Exit" to leave.